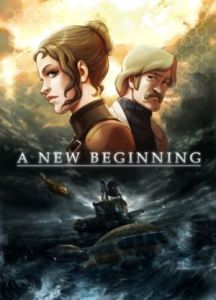 German adventure game A New Beginning is set in the distant future following an ecological disaster which rendered life impossible everywhere but caves deep underground. Many species have gone extinct or are nearly there – the human race among them. Users are among researchers traveling back and forth in time attempting to find a moment when the cataclysmic sequence of events leading up to the destruction of the Earth could have been prevented.