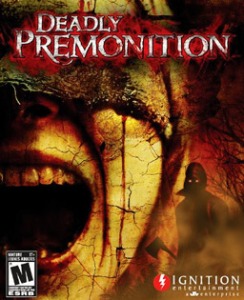 Deadly Premonition, a Japanese open world survival horror game developed by Access Games for Xbox 360 and PlayStation 3, is centered on a FBI investigation within the fictional, rural town of Greenvale, Washington. As Special Agent Francis York Morgan, you must uncover the identity of the Raincoat Killer, responsible for serial murders of young women. Deadly Premonition is notable for a few things — introducing open world, nonlinear gameplay; the integration of horror comedy into the survival horror genre; a free-roaming story structure where characters have their own schedules. Additionally, Deadly Premonition is known for its infamous, headline making strangeness and its highly polarizing effect on critics. It is considered by some to be a key example of video games as art.