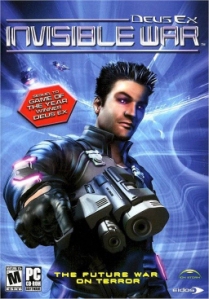 Deus Ex: Invisible War, a Windows/Xbox cyberpunk-themed first-person action video game sequel, is set in 2072, two decades after the original Deux Ex. In 2072, the world is being reconstructed following a catastrophic event referred to as “The Collapse”. After a terrorist attack decimates Chicago, players assume the role of hero Alex D, a student at the mysterious, conspiracy-riddled Tarsus Academy.