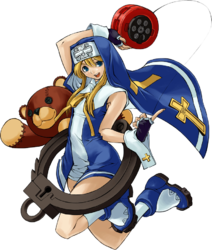 Bridget is a character in the Guilty Gear series, first appearing in Guilty Gear X2 (2002). Though described as male, Bridget was raised as a girl. Bridget was one of a set of twin boys born in a village where twins were bad luck. It is unclear how Bridget identifies in terms of gender or sexuality, as neither seems explicitly stated in the game. He does react negatively when people assume he is a girl, however, suggesting this is not a trans woman character.

You can see Venom battle Bridget in this video.