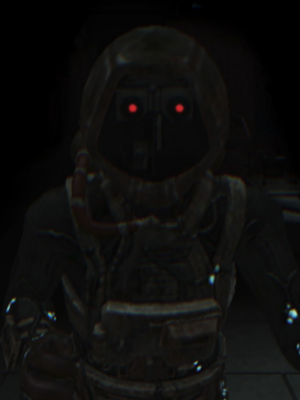 Simon Jarrett is the main character of the 2015 science fiction survival horror game SOMA. Following a car accident that resulted in serious brain damage, Simon scans his brain as part of an experimental treatment for his terminal condition. 100 years later Simon wakes up in the abandoned underwater science facility PATHOS-II, and finds that his consciousness, kept in storage following his brain scan, has been implanted into a new body. Simon inhabits two bodies throughout the course of them game, both having previously belonged to women: Imogen Reed and Raleigh Harbor, respectively. While no direct conversation about the gender dynamics of Simon’s brain transfers ever takes place, their inclusion in the game speaks to a certain queerness inherent to its transhumanist themes.