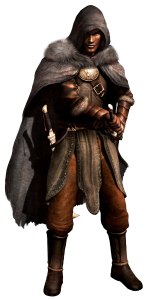 Kian Alvane is one of the playable protagonists in Dreamfall Chapters. He is a sword-wielding assassin and apostle of the Azadi faith. Over the course of Dreamfall Chapters and its predecessor Dreamfall, Kian’s religious zealotry is challenged. He is an orphan, though some fans suspect that he is connected to the protagonist of the first game, April Ryan, since he shares his last name with the narrator of The Longest Journey, Lady Alvane. In the third update to Dreamfall Chapters, Kian reveals to another character that he is gay after he is accused of having a secret relationship with a woman. He is asked if “something is going on between” them, to which he responds: “I can assure you there’s not. I have no interest in Na’ane. Or in any woman. Not in…that way.” When he is pressed about how he “deals with” being gay, Kian explains a bit about the attitude toward homosexuality in his culture.

“There are some rules that cannot be broken. A soldier can’t bed a priestess. If they’re caught, it’s exile for the woman and death for the man. A Sister can bed another priestess. She can also take a civilian lover as long as she’s discrete. A pregnant sister loses her robes. And a soldier can lie with another soldier. For some it’s a passing phase. For others, convenience. Soldiers become officers, or they leave the service, begin a civilian career. Marry, have children. For the rest of us, our society does not condemn us. In the eyes of the Goddess, it makes us no less worthy. It’s simply how we were born. You only see us Azadi as bigoted and reactionary. And in our treatment of magicals perhaps we are. We are. We have our reasons for fearing magicals. Not good ones, but still. We have no reason to fear men who love men, or women who love women, and so we do not condemn them or persecute them. I don’t have to ‘deal’ with anything, Likho. I am who I am, and no one has ever thought less of me because of it.” (Transcribed from gameplay.)

The interpretation of the conversation as Kian coming out as gay has been confirmed by the developer Red Thread Games, who posted confirmations on both Steam and in their own forum.

Video of conversation where he comes out https://www.youtube.com/watch?v=x4NdY5wNk4o