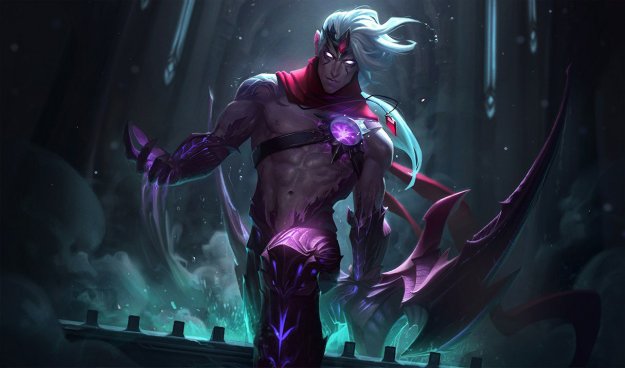 Upon his initial release in 2012, Varus was a powerful archer and ascended hero, a champion that was altered by celestial magic. Varus, along with other ascended fought against the Icathians and the creatures they had released from the void. In this war Varus ultimately became consumed by an unquenching desire for vengeance and retribution against the atrocities of the Icathians and the creatures of the void. While his side, Shurima, ultimately won the war, he and the other ascended were so corrupted by the horrors they faced in the war that they became Darkin: corrupted ascended. These Darkin, forgotten by the world that they had saved, eventually turned on each other starting The Great Darkin War. The mages of Runetera later found a way to imprison the Darkin and all of their celestial powers by binding their souls within their weapons. Varus’ bow laid dormant and forgotten until it was eventually awakened by unknowing humans.

This lore was eventually expanded with the overhaul of Varus’ background in 2017 (Mikel, 2017). Riot introduced the background of the humans who awoke Varus with the addition of the League of Legends comic, Varus: Heartlight. This comic stars two men, Valmar, who is blonde, passionate, reckless, and enjoys fighting; and Kai, who is brunette, calm, and values balance. These two men are in love, and frequently refer to each other as their heartlight, a term of endearment seemingly similar to soulmate. The comic begins with the two men felling a powerful beast, which wounds Valmar when he makes a reckless attack. The two then head to Valmar’s family’s home, where Kai meets the Valmar’s mother for the first time. Later, when they are presenting an offering from the beast they slew to the local temple, the temple is attacked by a rival army, the Noxus. While they win the fight, Kai is mortally wounded so Valmar brings Kai to the temple’s magical well knowing that it’s waters can renew that which is broken. Valmar jumps into the pool with Kai, not knowing the cause of the well’s magical water is Varus’ bow which lays dormant at the bottom.

Depicted in a music video created by riot, “Varus: As We Fall,” Varus is awakened by Kai and Valmar’s jump into the well. Varus grant’s Valmar’s wish to save Kai’s soul, but as payment takes Valmar’s body. Thus, the three souls merge into Valmar’s body, creating an amalgamation of the two heartlight, and vengeful soul of the Darkin. From here, Varus goes on a rampage, consumed by the vengeance of Valmar and Varus, which is depicted in the comic Varus: Retribution. By the end of the comic, the two heartlight are able to overpower the will of the Darkin and the three set out together on separate missions. Valmar and Kai are looking for a way to be restored to their bodies so they can go back to their lives as lovers, while the Darkin seeks to awaken his dark kin.