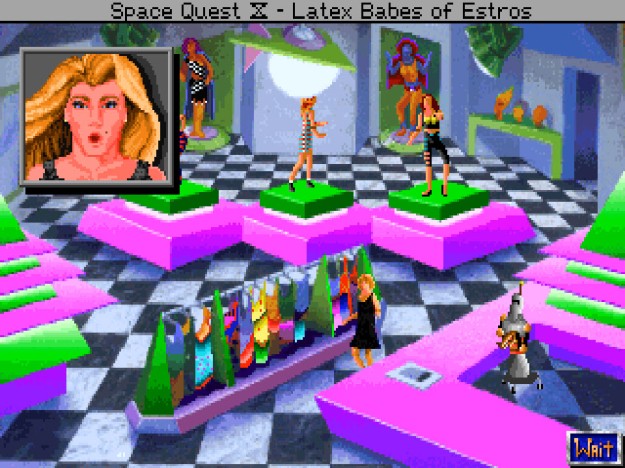 In Space Quest IV, Roger must dress up as a “blond woman” to access an ATM machine in Galexy Galleria shopping mall. The author of a 1993 review commented on this: “at one point Roger has to cross-dress to fool a computer” (Ardai, 1993, p. 34). Another author suggests that “SQIV must be the first game to include the main character dressing in drag in order to solve a puzzle (Sorry Cloud from Final Fantasy VII, but Roger got there first)” (Spaul, 1999). This scene is available in this video starting around 13:00 (set up) and about 27:00 (for actual drag scene; *content warning* there is some transphobic dialog at the end of the scene). The image above shows Roger in the dress and wig required for this puzzle.

The robot clerk who sells Roger the required dress and wig gives him a hard time about the size of the “friend” he is buying the outfit for, and when he says “she’s built about like me” the robot says “a likely story. Good thing I can keep a secret sweetie.” After she gives him the dress, she says “If that ‘special someone’ needs a wig, this one should look pretty good on you.” Once he is dressed, she says “Very lovely honey, it was made for you.” When Roger opts to wear the outfit and wig home she says “that will be 60 buckazoids, sicko.”