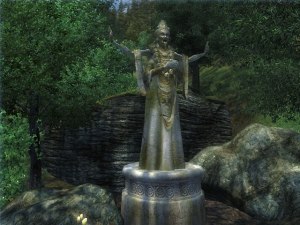 In the Elder Scrolls: Morrowind, Mephala (also known as the Webspinner) is the Daedra of sex, murder, and secrets. Like all of the Daedric deities, Mephala does not technically have a biological sex. However, Mephala has been physically manifested as female in all of her appearances The Elder Scrolls series, and is generally referred to with she/her. Known as “The Androgyne”, Mephala has been represented in statues and artwork with both male and female genitalia. The Dark Elves worship her for introducing them to the practices of murder and duplicity, hence one of her names being the Queen of the Eight Shadows of Murder.

<games listed below are still being researched>