Bryce Dawkins does not actually appear in Grand Theft Auto IV (aside from a few election billboards), but is mentioned throughout the game. He is the closeted boyfriend of Bernie Crane, Deputy Mayor of Liberty City, and a right-wing politician who is particularly known for promoting anti-gay legislation. In the game he is blackmailed by multiple parties who plan to reveal his relationship with Bernie. In the game GTA: Lost and Damned, the player-character Johnny bugs Bryce’s car, but the only one heard speaking is Bernie (video here).

When Dawkins’ affair is finally made public, he denies that he is homosexual but enters a rehab clinic that is rumored to specialize in treating sex additions. He is married to a woman, though it is suggested in the game that he has had many boyfriends. On various wikis, the “Troy Harder” user from love-meet.net, redirects to Bryce Dawkins, but there is some debate as to whether they are meant to be the same character, particularly given that the profile indicates the user is explicitly heterosexual (image of user’s profile below). 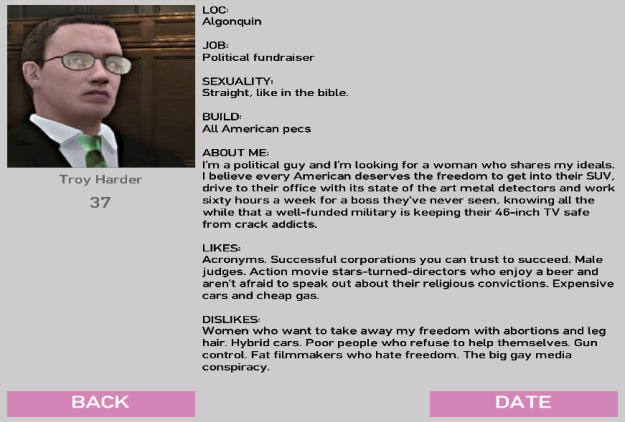